Victoria Thomas never stops moving. Her day is full with classes, work (two jobs!), and her on-campus club activities. The 2018-19 president of the Student Government Association, she is also a student multicultural advocate in the office of multicultural affairs where she is part of a team that is spearheading diversity and inclusion efforts among her fellow peers. A Springfield (MA) native, both her parents are ministers and she is bi-racial, Trinidadian and Puerto Rican.

Photo: Victoria is already getting a jump start on her career goal of becoming a physician assistant by working at a local rehabilitation center. While on campus or attending class, it’s not unusual for her to be in her uniform with her laptop in one hand and books in another. 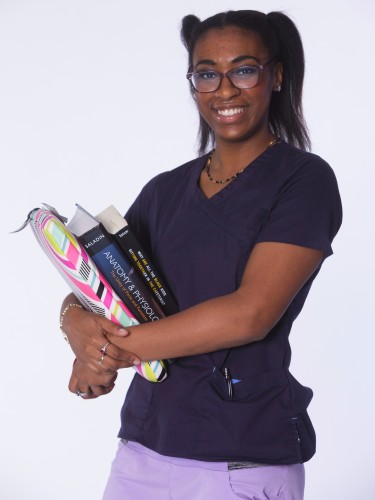 “I grew up in the South and the North, and that experience has really shaped my perspectives on diversity and inclusion. I was exposed to two areas of the country that were different in both values and culture.

When I was around five years old, my father accepted a position in a church in Arkansas. We first moved to the small town of (and it was really small!), and eventually to Benton. From kindergarten to seventh grade, I went to the local schools. I was definitely in the minority, but when you are younger you just don’t notice things like the difference in color. In fact, I had both white and black friends. As I got older, I started to notice I was not the same as the other kids. There were only a couple of kids of color I could identify with—but it didn’t bother me at that time.

It was only when we moved back north to the Springfield area that I noticed I had a lot more cultural similarities with my peers than I was used to. It was affirming to my and helped to define my character and personality. And I noticed the culture was more diverse. The world has a lot more color than I thought.

I attended Agawam High School. In the beginning, it was an adjustment. I still had a southern accent. I looked like I belonged, but I didn’t feel like I belonged. Eventually, I found my comfort level and I was a cheerleader and was consumed by my homework. I was a regular high school student.

I didn’t start engaging with the concepts of diversity and inclusion until I came to Bay Path. I was very intentional about what I wanted to do in college. I wanted to get involved, grow, and influence people in a positive way.

A campus is a great place to explore diversity and inclusion. Let’s face it. In America, we label and compartmentalize things. It is natural. And we all have unconscious bias. Even I have unconscious bias. But talking about diversity and inclusion, major themes in all our everyday lives, can help all of us tackle the big problems. I’ve found we often have good intentions of trying to be more diverse and inclusive, but we have to go through those uncomfortable conversations. We have to get our hands around the topics. And we can’t get there unless we lose the fear. Education helps you to lose the fear and it provides a common ground for respect. I’ve learned that our experiences shape the way we are in life, and no matter where we come from or what constitutes our identity, it’s critical that we share our stories and reflect on ways to make our society more inclusive to people from diverse backgrounds.”