When Bay Path University first opened its doors to students, there were typewriters and calculating machines in the classrooms. Today, we live in a world driven by iPads, mobile phones and laptops.

Things may change, but throughout Bay Path’s 100-year-old plus history, it has been true to its core promise—of providing innovative, career-focused educational programs that have evolved in response to the economic, cultural, and technological influences of our time.

Founded in 1897 as the Bay Path Institute, Bay Path’s first location was at the corner of State and Dwight Streets in downtown Springfield, MA. For decades, it experienced both educational and financial success, becoming one of the largest and most respected co-educational business schools in the region. Known for its accelerated 48-week format and strong academic programs, particularly business management, accounting, teaching, and finance, Bay Path’s growth prompted a move in 1920 to a new site located at 100 Chestnut Street in Springfield, MA. There, it flourished for nearly 20 years increasing to 1200 students just prior to 1941. 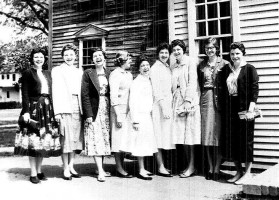 History interceded with World War II, profoundly impacting Bay Path. All young, able-bodied men enlisted for the effort; meanwhile, young women working on the factory floor moved to company offices in positions unimaginable before the war. The future would never be the same. Noticing there was an opportunity to expand the role of women in business, Thomas Carr, a leading Springfield businessman, purchased Bay Path Institute in 1945. He made tremendous changes including: shifting Bay Path to all-women, changing the name to Bay Path Secretarial School for Women, and, most importantly, moving Bay Path to its current location in Longmeadow, MA. In 1949, it became Bay Path Junior College and was chartered by the Commonwealth of Massachusetts to award the Associate in Science degree. President Carr was instrumental in expanding the reputation of Bay Path by initiating nine major building or renovation projects, and increasing the number of academic majors.

In 1968, President Carr stepped down from his leadership position. He was succeeded by President Douglas Perkins, who resigned after three years to pursue a position with the Federal Land Bank.

In September 1971, Dr. A. Randle Elliott became Bay Path’s third president. Dr. Elliott was a scholar dedicated to enhancing the academic reputation of Bay Path, as well as broadening the College’s offerings to the community and non-traditional women.

The fourth president of Bay Path came from the ranks of the faculty. In 1979, Dr. 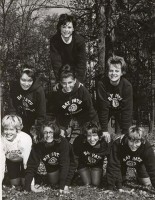 Jeannette Wright took the helm and ushered in an era of profound changes from reengineering the curriculum to petitioning the Commonwealth to allow Bay Path to award bachelor’s degrees. At that time, the name was officially changed to Bay Path College. Dr. Wright served for 15 years, until her untimely passing in 1994.

A search committee was convened and selected Dr. Carol A. Leary as the fifth president of Bay Path College. Under her leadership, Bay Path has undertaken momentous changes including:

In addition, one of the most significant milestones in Bay Path’s history was achieved: as of July 1, 2014, the name was changed to Bay Path University. This begins a new evolution in Bay Path’s history, one that includes multiple campus sites, over 3,290 students, and an online international presence that is broadening the reputation and solidifying the future of the University.