Queen’s We Will Rock You Comes to Mills Theatre

Kevin Barlowski, Director of Theater and Performance Studies, shares his thoughts on the upcoming musical, We Will Rock You, to be held from November 8 to 11 in Mills Theatre, Carr Hall. For performance times and info, or to buy tickets go online at Baypath.tix.com or call the Bay Path Student Information Desk at 413.565.1307. 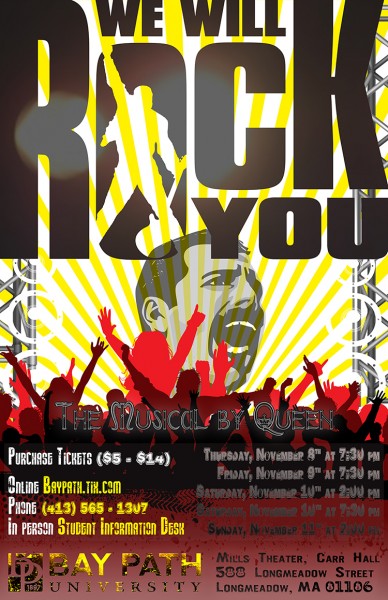 Would you say that We Will Rock You is a departure from previous productions the audience has seen in the last few years?
It certainly is…it is an exciting and welcome departure! This is a musical inspired by the rock band . Over the course of two hours, there will be 20 iconic Queen songs that will essentially bring down the house. It’s a musical with a big wow factor.

What does that mean?
A musical means the songs are penned first, and the production and script are wrapped around the music. It’s a specific type, yet cohesive, of musical theatre.

Does it have a plot?
Yes, but it is not about Queen. Naturally, there is a Freddy Mercuryesque character. And that is the main protagonist by the name of Galileo . We Will Rock You is set in the year 2304. It is a post-apocalyptic world where free thinking, fashion live music are forbidden. Galileo and Scaramouche, whom he meets along the way, become revolutionaries in a sense. Together, they join forces to fight and save rock and roll, and ultimately for creative expression.

Queen concerts, such as the Live Aid at Wembley Stadium, are some of the more memorable performances in rock and roll. Are you a Queen fan?
Well, let me share something with you. When I was in high school, I attended a summer pool party at a friend’s house. This is just one of those moments you remember in your life. I went into the house to cool off, and it just so happened my friend’s father had just received a full DVD set of Queen concerts. He had on the Wembley Live Aid performance. I stopped in my tracks. I was transfixed. I had never really heard of Queen. Meanwhile, my friends were asking, ‘Where did Kevin go?’ They came into the house and before I knew it there was a whole group of us just hooked watching this concert. Dripping wet. We were mesmerized. Personally, Queen had never found their way onto my radar. They were before my time. But I like to think that was a rediscovery. Now, flash forward and I am thrilled to introduce others to this band and their legendary music.

How are the Bay Path students in the performance reacting to this musical?
Yet again, Queen is resonating with another new generation. At first, students were saying, ‘Queen…Queen Latifah? Queen Elizabeth?’ I had to check myself. There is another meaning to the word Queen. So, I’m using this musical as a teachable moment. During our Bay Path students' time with the performing arts, we try to give them different experiences on stage, so they get as much exposure to the musical theater canon as possible. For example, they have done contemporary, splashy Disney productions. They did a musical with roots in the 1940’s—The Wizard of Oz. But, they have never done a rock and roll musical. Remember, our students are familiar with rap, pop, and hip hop. So, it may be hard to believe, but we are exposing them to a new genre. I have found that this experience is very much in their wheelhouse. Remember, singing musical theater versus rock and roll are two very different musical skill sets. But, they are thriving with these Queen songs. Our community is going to hear our students in a very new and extraordinary way.

Have they seen photos or clips of Queen?
We have a movie night scheduled to watch the Wembley Live Aid concert together. And we are going to take a field trip to see the movie, Bohemian Rhapsody, when it comes out in early November—right before our production, I might say! Perfect timing.

Queen is known for their unique musical style. How will you be handling that part of the production?
Thankfully, Bobby Tomasulo, our Director of Musical Activities, has the task of making that magic happen. He is a master at his job.

Can you tell me something about the cast?
It is a cast of 15, made up entirely of Bay Path traditional undergraduate students.

Who is this musical geared to?
It’s a musical for all ages. This show has been around for a little over 15 years, and it has made its way around the world. The script lends itself to being constantly retooled and updated. As a result, there are some modern references that the audience can relate to.

Is this going to be over the top?
Of course—just like Freddy Mercury would want it to be.

If someone is a Queen fan, this could be an ultimate experience?
Absolutely, without a doubt.

Last words about We Will Rock You?
With this production, the audience has an opportunity to really be part of a musical. Just like the Queen concerts, it is very experiential and immersive. This is fun and joyful theater. It is a time for two hours. A nonstop explosion of energy and good old rock and roll music.