The Bay Path student population reflects the demographic map of the country: Millennials, Gen Zs and diverse. Millennials are between the ages of 24 and 39 (born between 1981 to 1960), while Gen Zs are 23 years and younger (born after 1996).

Don’t look now, but there is a new voting block on America’s horizon. In the 2016 presidential elections, the Millennials barely caused a ripple. In 2020, there has been a seismic shift as the Millennials and the leading edge of their younger cohort, Gen Z, have combined to make up 50.7% of our country’s population (Brookings Institute, July 30, 2020). As they look to an uncertain future, their political clout will only expand as their voting eligibility numbers grow. The 2020 presidential election is just the beginning of their influence.

So who are the Millennials and Gen Zs?

Their group characteristics are remarkably similar: They are more racially and ethnically diverse, digital natives, and on track to be the best-educated generations in American history.

And according to another Pew research study (fall 2018), their viewpoints are also aligned. They want an activist government that works on behalf of the people, purposeful responses to climate change, and an acceptance of societal changes that acknowledge the uniqueness of individuals and families.

In the 2020 presidential election, it’s predicted that a record number of Millennials and Gen Zs will be casting their votes. Their voices are beginning to be heard.

In the weeks leading up to the election, the Bay Path community held several events on the importance of voting and citizen participation. This year had particular significance being the 100th anniversary of women’s suffrage. A Thumbprint Lecture entitled “Use Your Voice to be the Change,” the first in a series of four, was held on September 30. The featured speaker was State Representative Liz Miranda. One of a handful of Latinas in state government, her journey from a neighborhood in Boston to becoming a social activist was inspiring for the students. Representative Miranda encouraged students to become involved with their communities, and, more important, to vote. At the same time, the Voter Squad, comprised of student, faculty and staff members began a campaign promoting voter registration, providing details through social media and email about mail in, absentee, early, and same day voting, and sharing websites with information about individual state ballot questions and where to vote. The following Bay Path students and first time voters shared their stories. 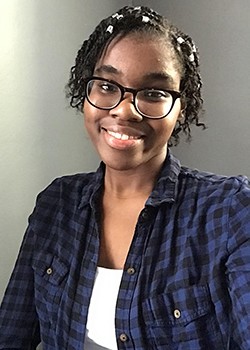 “This is my first year voting. I am not a vocal person but this was one way for my voice to be heard. When State Representative (MA) Miranda spoke in the Thumbprint Lecture, her story showed how important it is for people in this generation from different backgrounds to be involved in the political process.

My family is Caribbean so I made an immediate connection. Even though my goal is to do research in neuroscience or become a physician assistant, in time I can see myself being politically active in my community. Of course, everything doesn’t need to happen at once. The first step—and Representative Miranda encouraged this—is to get out and vote. Be part of the change. With all the events that are happening this year—COVID and George Floyd—it made my vote even more impactful.

“I did early voting in person. It was very simple. After I finished, it felt great. As for other Bay Path students, I am not sure how they are voting. They don’t often say, but would rather show it on social media. I’m just happy they voted!” 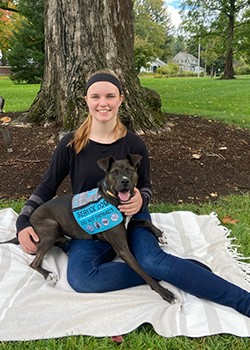 “Was I going to vote? Absolutely yes. Right after I turned 18, I registered to vote online. This is my first presidential election and I did early voting. Before I cast my vote, I made it a point to do research, particularly on the ballot questions. Generally, I don’t read newspapers because I think they are biased, and I don’t pay attention to social media. I prefer certain websites, such as vote.org, as places to get my information.

“I know this election is really going to affect my future. For me, I am very interested in climate change, women’s rights and social justice. With my vote, I am telling politicians what matters to my generation. I want to vote for people who support my needs, values, and help us to be strong economically as a country.

“I think it is important for a person to put their say in to the system. Of all the people I know, there is only one person who is not voting. That’s how important it is to us. I believe it is a way to control what’s going on around us. It enables me to support what I want to support. If I don’t vote, I can’t fault what’s happening.” 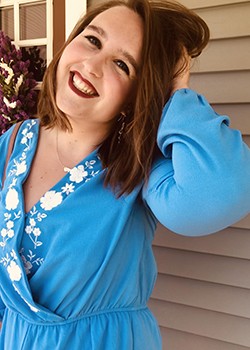 “I have signed my travel forms and will be going to Kennebunk, Maine on election day to vote in person. This is my first presidential election, but I was excited and blessed to cast an absentee ballot in Maine for the primary. I voted for Elizabeth Warren! I really want a change and I would love to see a woman in office.

“With this election, we have a chance to alter the course of history. I think we all have to recognize the privilege of fighting to make change. This is an all hands on deck moment. We’ve been sitting back and now we need to step up.

“I know the issues that are important to me. As president of the Environmental Club, climate change is one of my top priorities, as is women’s rights, social justice, and LGBTG rights. In Maine, we have a big senate race with Susan Collins (R) and Sara Gideon (D).

“It’s kind of interesting because my sister works for Susan Collins. She’s a year younger. It makes for interesting conversations at the dinner table. I am proud of my sister, but sometimes her positions contradicts my morals. She is conservative and I am gay. But despite our differences we are very close. We call each other every day. This election has taught me quite a bit about relationships…and acceptance. “

Madison is president of the Student Government Association and a member of the Voter Squad.

Look for a follow up story on our three new voters. As the votes get counted and the country anticipates the outcome, their first time journeys will continue as they discuss the outcome of the 2020 election.