“The best of America drifts to Paris. The American in Paris is the best American.” – F. Scott Fitzgerald

Everyone belongs in Paris. The city of love, the city of lights, of fashion, history, food, and wine – everything you could ever want. 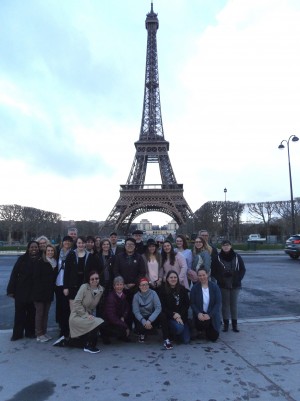 This was my first out-of-country experience, and I fell in love with Paris. I have traveled across the United States and up and down each coast but have never encountered a city like Paris. Nothing can compare. It is overwhelmingly endearing to know that every building you are looking at - and doesn’t seem to be the right word because they are more like massive art installations - is welcoming you in with its own stories and secrets. The city speaks with you, it wants you to be a part of its narrow winding streets, it invites you to sit at one of the thousands of cafés and watch the river in all her beauty change throughout the day. It’s impossible to not take a piece of the city home with you.

Choosing a favorite spot is difficult because I feel like I may offend the history of the city by favoring one story over another. Just between you and me, I’d say the Musee D’Orsay and the Louvre were at the top of my list. Standing in front of Vincent van Gogh’s self-portrait, making eye contact with him, was bizarre in the best way possible. It felt like I was communicating with the people of the past by appreciating time and passion they put into their masterpieces.

I have always wanted to make a home in another country, but the idea of learning a new language, finding a job, a place to live and all the logistics looms over me making my dream of being an international city-dweller just that, a dream. Feeling like an outsider in a new environment is what really weighs on me, but I realized that’s something I have inflicted upon myself. People say that the French are snobs, but I saw a generous, welcoming side to the people I met. We spent an afternoon at vineyard run by a family and they graciously welcomed us into their lives, we saw how passionate they were about their work. I don’t know if I ever met a happier person in my life, I couldn’t help but feel warm as we left, and it wasn’t just because of the wine. I also ventured out with a friend from the group and had dinner with a couple in a brasserie one night. We chatted for a hours and they told us about their move from Mexico to Paris. Listening to real people talk about how they were able to make a strange new city their home and learn this new language and culture in less than a year gave me hope that I could do the same. I learned that everyone in Paris is there because they want to be, and that is the kind of environment I want to be in. It is a hub for artists, writers, creators of all kind and it welcomes all those with an open mind.

To any students that might be reading this, I cannot express how beneficial it is to take advantage of the Capitals of the World Trip. I’m not sure when I would have had an opportunity like this without Bay Path. Taking a trip and immersing yourself in a new culture is a different kind of learning we might be used to as college students. It isn’t active learning, it’s passive learning. Learning through your senses, through experiences, through meeting real people and it can’ be replicated or replaced in any classroom. You don’t have to travel to Paris, although you would be crazy to not want to, you have to go somewhere.