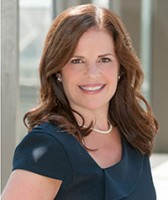 Joining HNE in 2002, and prior to assuming the role of CEO in April of 2014, Maura served as Chief Operating Officer at HNE.

Now, under her leadership, Health New England has grown in membership size and scope, and is a strong advocate for promoting measures to increase access, lower costs and improve the quality of health care overall.

Ms. McCaffrey earned her Bachelor of Science degree in Pharmaceutical Sciences from the University of Rhode Island, and her Master of Business Administration degree in Healthcare Administration, from Anna Maria College. She completed Executive Education programs at both the Wharton School at the University of Pennsylvania and Babson College in Massachusetts, where she has also served as a mentor in the Babson Executive Women’s Leadership MBA program.

Recognized as an excellent communicator and solutions oriented leader, Ms. McCaffrey is active and influential in the industry. She sits on several boards, including the Board of Directors for the Massachusetts Association of Health Plans, the national Health Plan Alliance, Western New England University and the Pioneer Valley United Way. She is a member of the Baystate Health President’s Cabinet, Associated Health Insurance Plans, the Academy of Managed Care Pharmacists, and participates with Link to Libraries. Ms. McCaffrey was recognized as the 2014 Business Woman of the Year by the Western Massachusetts Women’s Magazine and is proud to be a 2014 Go Red Leading Lady for the American Heart Association. 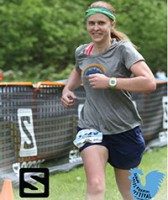 Meghan Lynch is the Chief Executive Officer and President of Six-Point Creative Works, a full-service brand strategy and marketing agency. Meghan co-founded Six-Point Creative as a place where “great brands find fulfillment” – an agency that helps companies and nonprofits find the power in their unique strengths and stories.

Meghan has over 12 years of marketing and advertising experience, and in her current role, she serves as a key brand strategist for clients, as well as leads the agency’s business and client development.

Meghan grew up as a daughter of an Episcopal priest and a teacher, who instilled in her a strong work ethic and a desire to give back to her community. Meghan is active in a number of nonprofits and causes, including serving as a corporator of the Springfield Museums and serving on the board of the Center for Human Development and the Springfield Public Forum. Meghan is also active in hunger relief causes such as Heifer Project and Bread for the World.

In 2010, Meghan was selected as a “40 Under Forty” for young business and civic leaders by BusinessWest.

After graduating Summa Cum Laude at Saint Anselm College with a major in English literature and a minor in marketing communications, Meghan earned her Masters degree at Boston College and had an eye toward PhD programs and life as an academic. While attending classes, she worked in an advertising agency, first as an office manager and then as a scriptwriter and co-producer for a series of television commercials broadcast in over 50 U.S. markets. By the time she completed her degree, Meghan found herself enjoying her day job even more than her time in the classroom, and decided to continue in marketing and advertising.

Meghan enjoys spending time in the woods and mountains, hiking and trail running with her dog, Dexter, or biking with her husband, Martin. Always willing to push the limits, she has recently started running “ultramarathons” to test her own physical and mental limits, and completed events at the 50k and 50 mile distances. 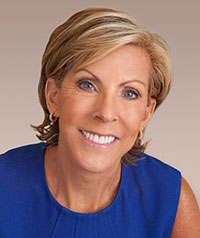 In 1998, upon being told that she had at best, only 3 years to live and that there were no viable treatment options available and none in the drug research pipeline, she founded the MMRF. Since then, Giusti has led the Foundation in establishing innovative, groundbreaking research models to dramatically accelerate the pace at which lifesaving treatments are brought to patients. Today Giusti is widely recognized as a cancer warrior, a champion of change and a strong advocate for patient engagement, not only in their cancer care, but as part of the research and drug development process.

Kathy’s visionary leadership has earned her several prestigious awards and recognitions. Most recently, she was ranked #19 on Fortune Magazine’s Worlds’ 50 Greatest Leaders. In 2013, she was named an Open Science Champion of Change by the White House. In 2011, she was named to the TIME 100 List of the world’s most influential people.

Kathy has been profiled by numerous media outlets, including the Today Show, CBS Evening News, CNN, The Wall Street Journal, The New Yorker,Fast Company and the Harvard Business Review, to name just a few.

Kathy currently serves on the Executive Management Committee of Stand Up to Cancer and the Harvard Business School Healthcare Advisory Board. 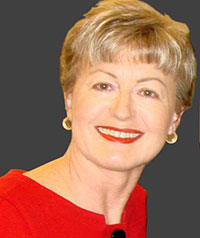 Caron Hobin is the Chief Strategy Officer for Bay Path University’s American Women’s College Online. In her role, she directs the marketing and enrollment divisions and has developed the unique women-focused brand of Bay Path University’s latest innovation. She is also the creative genius for the Women’s Leadership Conference since its inception in 1996. She is the driving force behind the Conference, taking concept to reality by developing the theme, determining the speakers, shaping the experience, and providing the leadership for the many staff members and volunteers who are integral to the success of this event.

In her career, she has worked for the federal government, the corporate sector, and an entrepreneurial startup. With that experience and knowledge, Caron made a bold step and became a small business owner with her husband, working from home while raising a young child. In time, she discovered her true calling in higher education administration.

A graduate of Harvard University’s Institute for Educational Management, Caron has worked in the higher education field at women’s colleges for the past 25 years. She joined the Bay Path administration in 1995 in the position of Dean of Continuing Education and Professional Development, and was promoted to Vice President for Planning and Student Development. Under her leadership, the division became a model for innovative programming, launching the One America Trip for students, the Sullivan Career and Life Planning Center, and several health and fitness initiatives, among others.

Caron is a product of women’s education, attending Wheaton College when it was all-women, and completing her bachelor of arts in government from The George Washington University. She also earned her Master in Business Administration at Simmons College in an all-women’s classroom environment. Her experience with women’s education profoundly impacted her and led to her interest and commitment to issues that impact women locally, nationally, and globally. Among her many volunteer efforts, she was a longtime member of the board of directors, as well as chair of the board, for Girls Inc. of Holyoke.

Caron’s interests are far and wide. A consummate traveler, a lover of books—her reading list stretches for miles, and a gourmet cook with a daring sense of taste, she approaches life with curiosity, humor, and, above all, creativity.

Caron is married to Jack Hobin and they have a son, Sean. Residing in Longmeadow, Caron and her family also have a home in Great Barrington, MA, the place where she finds strength and peace.