Within each of our students is an inspirational story of perseverance and strength, and we are honored to share them with our Bay Path community. This narrative originally appeared as part of Bay Path's #MyPath series on social media. 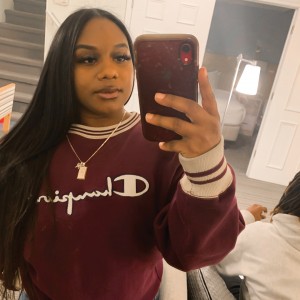 “I grew up in a household of six people. Me, my four siblings and my mom. My father was deported when I was a baby, so she was a single parent working two or three jobs at a time. You can imagine how tough that is, so as the second oldest, I always helped out as much as I could. But she didn’t want me to go to school. When you’re raised in a traditional way, you’re taught that women are supposed to tend to the children, cook, clean, do the laundry, do all the chores. Eventually, I couldn’t take it anymore. I was the valedictorian in my high school, I was a cheerleader, I enjoyed school, I loved school.

Yet, my family didn’t see why I needed to go to college, and after a disagreement with my mom, she kicked me out. I was homeless. Literally living house to house with friends. Trying to work. Doing what I could. Then, around that time, I got a call. I’d never gotten a call like that before. It was Bay Path. They wanted me, and they were asking how they could help. Bay Path wasn’t one of my top choices. I didn’t like how small it was. I didn’t like how different it felt from the urban area I grew up in. But they were the one that wanted to help me the most. It was so personal. Coming to Bay Path, some of the professors have stepped out of their way to help me. I could get that one-on-one, in-person attention I needed. It’s been tough, but I’m glad I did it. I’ve realized how strong I am.

My aspirations are to attend law school and become a lawyer. It’s something I’ve been interested in since I was six or seven when I’d read books way ahead of my grade level about wrongful conviction, Black history, Emmett Till. Things I felt I could relate to. I’ve experienced racism and discrimination in my life. I’ve been called the N-word. For some, I’m not Latina enough. For others, I’m not Black enough. No one wants to be pre-judged like that. I’m not someone who can be put in any one box. I’ve learned that here. I want to be my own person, so I accept everyone as they are, not as I seen them, without any pre-judgment.” -Ariana Alba ’21 #MyPath