Professor María Luisa Arroyo is an educator, feminist, and mentor.  Most of all, she is a poet. Her poems are the expression of her heart, soul, and memory:  evocative, personal, and daring. And like the great Puerto Rican poet Julia de Burgos’ self-defining claim: “I want to be universal,” Professor Arroyo claims four languages: Spanish, English, German and Farsi, and writes poetry that is shaped by four cultures: Puerto Rican, American, German, and Iranian.  Although Spanish is her first language, she embraces linguistic diversity. Ironically, Professor Arroyo is of the majority with this linguistic proficiency, as it is estimated that more than half the people around the world speak more than two languages. Monolinguists, which defines most English speakers, are in the minority.   The inaugural Poet Laureate of the city of Springfield, MA (2014-2016), she has several published works including her full-length poetry collection, Gathering Words: Recogiendo Palabras (2008), and her chapbooks Flight (2016) and Destierro Means More than Exile (2018), among others.

Photo caption: A published poet, Professor Arroyo holds a copy of her book of poems, Destierro Means More than Exile (2018).

“I was born in Manatí, Puerto Rico and raised in the North End of Springfield, MA. My parents, working-class factory and foundry workers, raised me with Island values that included conservative gendered roles in the household. While I was an outstanding student in Springfield Public Schools - in fact, I graduated from Classical High fifth in a class of 585 - college was not part of any conversation with my parents. For me, their Puerto Rican daughter, high school was enough. 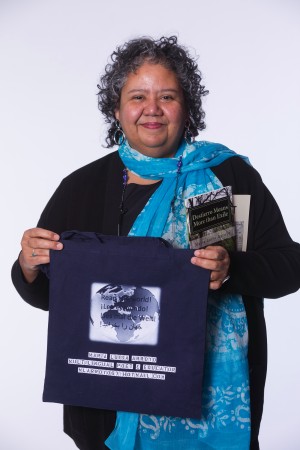 When I went to Colby, 95% of the students were white and most were upper middle class. I didn’t know I was poor until I went to Colby. Back home, I had my own room where I did my homework, practiced playing my violin, wrote poetry, and read for pleasure, after I, the only daughter, tended first to household obligations. In Springfield, because of busing back then, my friend group was as diverse as the schools we attended. It was at Colby that I first understood institutional racism.

In my first semester at Colby, I signed up for five courses, including German. In high school, I had taken Latin and Greek. In college, however, I wanted to take a language to have as my own. My faculty advisor, also the orchestra conductor, insisted that I take Italian because ‘it is easier for you people.’  He meant Puerto Ricans. He also questioned my English and my mother’s accent on the phone. I became livid. Somehow, I found the courage to challenge him: ‘First, I will never play in your orchestra. Second, I am taking German; and third, you are not going to be my advisor.’ And I left.

When I got back to my dorm room, though, I cried. My first German professor, Frau Margrit Lichterfeld, was incredibly supportive and became my advisor. I credit her for encouraging me to study abroad my second semester, freshman year with the Colby-in-Lübeck program. The experience felt so surreal and magical to me. The Hollecks, my host parents and upper-class medical professionals, welcomed me with a rented violin, keys to their home, and proudly stated in German: ‘You are our American daughter.’ They even refused to accept the mid-semester stipend to host me. Instead, they paid for my travels around Europe.

Interestingly, that semester abroad helped me to better navigate returning to a college culture that still did not know how to accept me. Thankfully, my college roommate and the students who studied in Lübeck became my close friends. Also, having Frau Lichterfeld as my major advisor helped me tremendously. I also credit her for nurturing my feminist consciousness and my creative writing in German as I took her courses, including “German Women Writers.”

During my junior year, I decided to study at the Universität Konstanz in Germany with a Rutgers University program directed by Dr. Harold Poor. At the time, I was grateful that my Colby financial aid package traveled with me. In Germany, I fell in love with an Iranian man and German became our love language. In time, I taught myself Farsi, his mother tongue. I even went to Iran, his homeland, but that is another story. The short version? We married. I had a son. We divorced when my son was two. I raised him on my own. And now my son, 22, is a college graduate and medical professional.

While my mother has her own views about my affinity with languages, I quickly realized as a kid the power of language. At home in Springfield, we spoke Spanish whereas English was taught in the schools. Growing up, there were no educational opportunities for me to cultivate my birth language. For example, I didn’t read a Spanish-language kid’s book until I was an adult! In Springfield Public Schools, mostly monolingual teachers praised me for my English - at the cost of my learning how to read and write in Spanish. At school back then, my Puerto Rican culture and language did not matter, either. Already a voracious reader in elementary school - thanks to Mami’s decision to have me and my brothers in the Head Start Program - I quickly developed a hunger to learn and what I call a binocular vision.

Whenever I read and learn, I see both who is represented and who is not. Then I ask clarifying questions and independently research answers. This includes my desire to see and to learn the originals of translations.

My passion for teaching comes from my passion for learning. Yes, teaching students in the Writing Program and in the WELL Program is my sweet spot. I strive to be a positive constant for them, encourage them to own their brilliance and invite them to ask clarifying questions, three components of my teaching philosophy. And they do.”