Within each of our students is an inspirational story of perseverance and strength, and we are honored to share them with our Bay Path community. This narrative originally appeared as part of Bay Path's #MyPath series on social media.

“On November 1, 2015, my life as I knew it changed forever. I woke up to the sound of gunshots outside my window and I felt this excruciating pain. I headed toward the bathroom, looking at myself in the mirror confused, not knowing what had just taken place. I called out to my friend, and she yelled, ‘Oh my God, Ruby, you’ve been shot!’ The bullet went through my elbow and came out through my forearm. They still can’t explain it. Six inches to the left and I wouldn’t be here to tell you my story. Now, it just so happens that that day my mom was coming home from Aruba. I was going to go on that trip with her but decided to stay home to focus on school. Had I gone, this never would have happened. Fast forward to 2019, we decided to go back to Aruba together. We were with a group on a tour going to this pool where you could swim with sea life and all that. I was like, ‘No way. It’s way too slippery, I have this injury and we’re in the middle of nowhere.’ A woman on the tour heard me, and we just started chatting. Turns out, she hosts a podcast interviewing regular people who go through different kinds of experiences. I ended up going on it and talked in-depth about so much. Not just getting shot but also gaining weight, losing a baby, being molested. All these things that had happened in my past that I was living with. I opened up with her. It was a journey of self-realization. I wanted to find myself again. Anyone who’s hit a hard patch in the road can relate. Maybe not to being shot, specifically, but feeling frustrated, angry, like you’re not good enough, like you want to give up. The feelings that came with being shot? Any human being has felt that. Those things were affecting me for a very long time, but I’ve turned everything into a positive. I don’t let them affect me anymore because I’m the author to my story. I deserve more, and only I can make that possible." 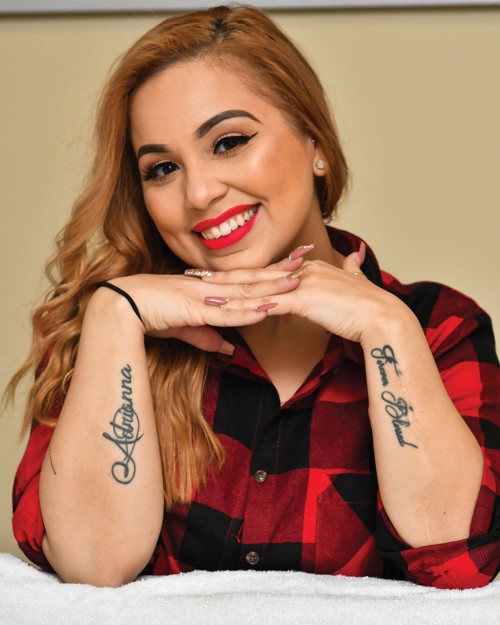 “Forgiveness is huge. I was able to confront the people responsible for my shooting. I told them to look at me because I wasn’t their victim. Then I said I forgave them. Not necessarily for their benefit but for mine. To help me move forward. When you hold a grudge against someone, even the most minute thing, it weighs on your soul on so many different levels, and you don’t even realize it. You can’t move forward. So, when you let go of all those things, I kid you not, it’s so liberating. That’s exactly how I felt. My dad was extremely upset. What parent wouldn’t be? But I told him to find forgiveness in his heart. I’m alive. I’m moving forward with my life. I’ve turned my life around. I want to continue. Before I was shot, I had wanted to join the Air Force, but three surgeries and a year of rehabilitation meant I couldn’t. I ended up working as a legal assistant at a law firm in Springfield. I was still figuring out exactly what I was going to do when an attorney told me about her experience at Bay Path. I thought about taking on a bigger role at the firm, so she told me to go for it. I’m getting my degree to be a paralegal now. My professors have been phenomenal, and everyone has been willing to help. I told my boyfriend recently that I may have to talk to my advisor and push a little further so I can become an attorney. I know I have the drive, and I believe in myself. So, I don’t know ye —the sky’s the limit. My experience has changed my life in such an incredible way. I’m so grateful for it. I’m not the same person anymore. If anything, I’m a better version of myself. If I had to go through it all over again, pain and everything, I would. It put a lot of things into perspective for me. Two weeks prior to being shot, I got a tattoo on that forearm that says, ‘Forever blessed.’ It’s crazy. I’ve been discouraged. But now I think maybe this was my purpose. If I share my experience with other people, hopefully I can help them find their way in their own lives. So, it’s so important to tell my story.” -Ruby Rodriguez #MyPath