Ann Hammer’s first job after graduating from Bay Path was with the Ford Foundation. It was 1962, and the Wellesley native found herself in New York City, an epicenter of business and culture, working for one of the world’s largest philanthropic organizations. “Philanthropy found me,” states Ann. “The Ford Foundation taught me so much.”

The early 1960s in the Big Apple was an exciting era—think Mad Men on Madison Avenue and beatniks in Greenwich Village—and Ann was not only in the thick of activity, but with her associate degree in secretarial science, she was also equipped to work in the most popular occupation for women at the time.

It was through a night class in art appreciation at Columbia University that Ann and Bob met. Eventually, they married and had a family. Bob, a graduate of Columbia, would go on to have a promising early career with a large chemical, plastics, and fibers company. In 1982, he shifted focus and launched a successful entrepreneurial career in computer-related technology.

An entrepreneur at heart, Bob early on “… saw things happening in the Silicon Valley.” He became involved with startups, leveraged buyouts, and turnarounds. In time, through hard work and risk-taking, this humble man from Brooklyn achieved incredible success. 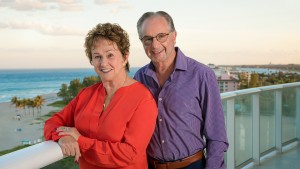 The common thread of their partnership is their commitment to giving back through the Hammer Family Charitable Foundation Inc. In Bob and Ann’s words: “In Silicon Valley, there is a strong tradition of giving back. They believe that philanthropy helps make the world a better place.” Bob and Ann chose education as a focus to their philanthropy.

Bob is quick to point out, “If there is one thing about Ann that I would like people to know, it is that she has a big heart. All her life, she has volunteered from children’s reading programs in schools to teaching exercise classes for the elderly to being an active patron of the arts. And she is a big advocate for education—at any age.”

That last phrase is important. Fifty years after receiving her associate degree, Ann enrolled in The American Women’s College and earned her bachelor’s degree online. In recognition of Ann’s accomplishment and with the knowledge of the joys and challenges of the women in her cohort, Bob established the Ann B. Hammer ’62, ’13 Endowed Scholarship for Adult Women, which over time reached $500,000. At our recent 20th anniversary One Day to Today event held on October 26, 2019, the Hammers enhanced the scholarship with an additional $500,000, creating the largest scholarship in support of adult women at Bay Path and The American Women’s College.

As for the significance of this leadership gift, both Bob and Ann are on the same page. “It goes without saying that women deserve as much opportunity as men. If they can have access to a career path, at any point in their lives, it benefits not only these women, but their families, workplaces, and communities. Moreover, we do this to honor President Leary’s legacy. It’s up to all of us to make sure that her work is carried on.”