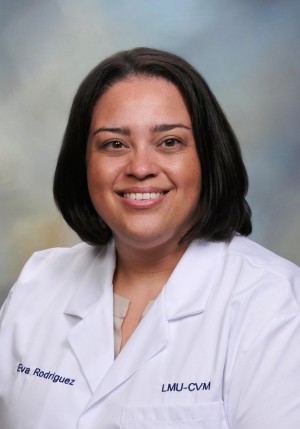 When Eva Rodriguez arrived at Bay Path, she knew exactly why she was there. Growing up in Springfield, she cherished the companionship of dogs and horses and long planned to apply that love to a career as a veterinarian. She also knew herself well enough to realize that academic, social and familial support would be critical to getting through the rigorous science curriculum and clinic hours required for admission to vet school.

“I wanted to stay close to home and have support in the sciences,” she recounts. “Throughout the whole process of visiting, admissions and being a student, I never felt like a number. The campus made me feel like everybody knew me. They knew who I was.”

As a biology major, Rodriguez was continually challenged and supported by Dr. Christine Bacon, chair of Bay Path’s science department. “I had her for microbiology, infectious diseases and immunology. Whereas some people would say things like ‘Vet school is hard, it’s competitive, you might want to have a fallback or consider taking a different career path,’ Dr. Bacon would say, ‘If you think you can do it and you’re going to put the work into it, then you can do it.’”

“There are only 30 accredited vet schools in the US. Some have only 60 slots, so it’s very competitive,” notes Rodriguez. Studies show that women’s colleges graduate math and science majors at 1.5 times the rate of coed colleges. Recent research by the Women’s College Coalition found that graduates of women’s colleges are more than twice as likely to attend medical school and earn doctoral degrees as graduates of coed colleges.

While looking for a job to augment her undergrad studies, Rodriguez met Dr. Samuel Carson, owner of the Ludlow Animal Clinic, and formed what would be the most influential relationship of her career. “I sent out a ton of resumes, and it wound up Dr. Carson’s wife was a Bay Path alum,” she explains. “They said they couldn’t technically hire me because I didn’t have a degree yet, but that I could shadow and learn.”

After graduating from Bay Path in 2009, Rodriguez entered Ross University School of Veterinary Medicine, but left the program after only a month. “In any form of professional school, you’re like drinking from a fire hose. They tell you that the first day.” she says.

Dr. Carson welcomed her back, and she worked with him for five years, gaining important clinical experience, but also witnessing the compassion, emotional fortitude and even business acumen that practicing veterinary medicine requires.

She returned to vet school in 2014, this time at the College of Veterinary Medicine at Lincoln Memorial University, and the completion of her degree coincided with Dr. Carson’s impending retirement. This past January, she took over the Ludlow Animal Clinic from him.

When considering the longer-than-expected road that led to this point, Rodriguez is retrospective. “Leaving Ross was so hard to process, but looking back, those five years were not a failure.”

Flexibility, resilience, innovation, and disappointment, balancing the emotional toll of losing patients and counseling owners with the pragmatic goals of running a business—they’re a culmination of the insight, personal approach and work ethic that were first instilled at Bay Path.

“I love the fact that I can try and help animals, and I love that it’s a challenge because they don’t talk to us,” Rodriguez states. “Being able to figure out what’s wrong, being able to solve that problem, and just being there for the owner, I really do enjoy that. I like having those connections with people. People come into us, and they have a sick pet and a lot of anxiety, and I get to help ease that for them.”