If you would like to nominate someone for an award in 2019, please email alumni@baypath.edu

The Recent Alumni Award recognizes an alum of the University who has graduated within the last 10 years and shows great promise as a leader.

The Bold Woman Award was established to recognize women who have dedicated their lives to being bold, taking risks, and striving to achieve their goals with dignity and passion.

The Power of One Award recognizes an individual, who, through their outstanding philanthropy and service to the University, has carved a path for others to follow. 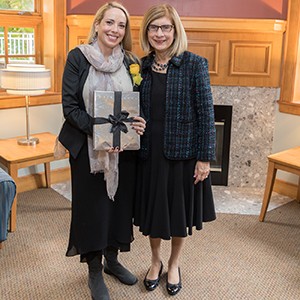 The Recent Alumni Award recognizes an alum of the University who graduated within the last 10 years and shows great promise as a leader. In 2018, the University recognized Kristen Ferraro, Class of ’08, a business management alumna from the One Day A Week program.

Ferraro, a native of Springfield, Massachusetts, became very involved with Bay Path’s performing arts program while a student. With the encouragement of her faculty, she moved to New York City. Over the years, she has held positions with such corporations as MassMutual, NBC, and Cigna, but after 18 years, Ferraro has returned to her passion of performing and is an actor, singer, and film producer. Last year, Ferraro was the executive producer of the short horror film, “She Came From the Woods,” which has been accepted at over 60 film festivals worldwide and has won over 20 awards. In December, she will be the lead in a web comedy series that will be filmed in Hartford, Connecticut, entitled, “A Coupla Pros.” The series is set to air online in Spring 2019. 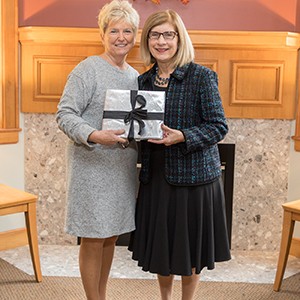 The James McGill Carpe Diem Award recognizes an alumna whose educational, employment and civic contributions truly epitomize the University’s Motto—Carpe Diem (Seize the Day). It is named in honor of Bay Path graduate James McGill, class of 1935. Donna Drouin, Class of ’68 and a 2008 graduate of Bay Path’s Master of Science in Communications and Information Management, was recognized with the 2018 award.

Drouin’s 40-year-plus successful career has included positions with major companies such as Olin Ski Company; United Technologies; Aetna; and Optum, a part of UnitedHealth Group. Having earned Six Sigma Black Belt certification, the common thread with Drouin’s positions is her commitment and expertise in the areas of quality control and process improvement. Drouin also had to manage the care of both her mother and her uncle, during which she learned first-hand the daily difficulties caregivers face when dealing with hospitals and health providers. Drawing on her professional background, she spearheaded the formation of the Patient and Family Advisory Committee with Middlesex Hospital: a group of patients, family, caregivers, and health system staff whose mission is to collaborate to achieve the highest quality, safest, and most compassionate care for everyone served. This group became a model for other Connecticut and New England hospitals. Today, it is a law in Connecticut that every hospital must establish a Patient and Family Advisory Committee. 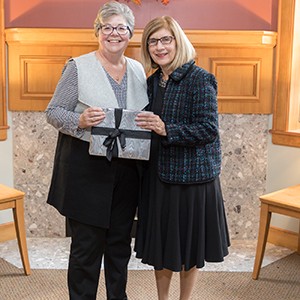 In 2018, Leslie Scheer, Class of 1975, was recognized with Bay Path University’s Bold Woman Award, established to recognize women who have dedicated their lives to being bold, taking risks, striving to achieve their goals with dignity and passion. Scheer was honored with this award because she has devoted her career to providing care and support to the elderly population.

After graduating from Bay Path, Scheer earned her bachelor’s degree in social work and master’s in gerontology at the University of Southern Florida in Tampa. Today, she is Executive Director of Elder Services of Cape Cod and the Islands. Founded in 1972, it is a nonprofit organization dedicated to promoting the welfare, enhancing the quality of life, and maintaining the dignity of older citizens in the towns of Barnstable, Nantucket, and Dukes counties. Overseeing more than 175 staff and volunteers who provide services ranging from home care to Ombudsman advocates to Meals on Wheels, Scheer has molded Elder Services into one of the most successful agencies in the Commonwealth. 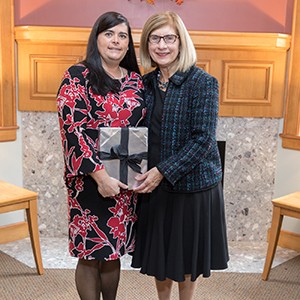 New in 2018, the University announced the establishment of  The Power of One Award. This honor recognizes an individual, who, through their outstanding philanthropy and service to the University, has carved a path for others to follow. Courtney Whalen, Class of 2000, and a 2009 from Bay Path’s MBA  was presented with the inaugural award.

Since Whalen graduated, she has maintained strong ties to Bay Path, always willing to step up and volunteer her time and talent. As an undergraduate student, Whalen was the student government president, a member of Maroon Key Honor Society, and a student liaison to many College-related groups and committees, among her many activities. As an alumna, she became president of the Alumni Association Council, and in that capacity served as the alumni representative on the Board of Trustees.

Whalen completed an internship at MassMutual Financial Group that led to her beginning an 18-year career at the Fortune 100 company. Today, she is a data management consultant working in the company’s new Center for Excellence at MassMutual. A member of the University’s Alumni Association Council, she is the chair of the fundraising group. She is also among the youngest members of Bay Path’s Millennium Society and Legacy  and has contributed to the BOLD Woman scholarship and the annual fund.