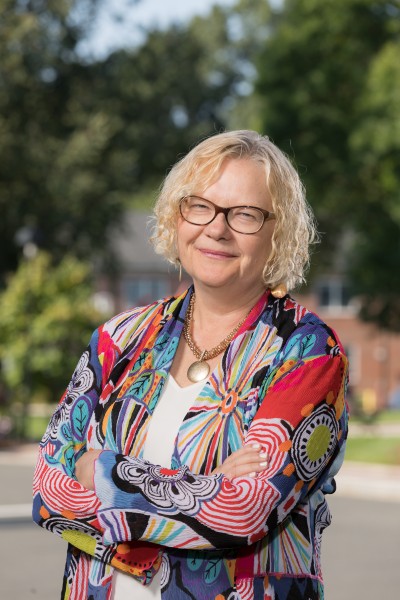 Dr. Melissa Morriss-Olson is Provost and Vice President for Academic Affairs (since 2010).  She serves as the chief administrative officer in the absence of the President and oversees all academic and student affairs functions as well as student recruitment and enrollment.  She leads all academic departments and programs which are organized in three schools and divisions: the School of Education, Human and Health Science, the School of Management and Science and the Division of Liberal Studies and Student Engagement.  She also oversees Institutional Research and Educational Effectiveness, the Center for Teaching and Learning, Athletics, Hatch Library, the Center for Online Teaching and Learning, International and Multicultural Recruitment and Student Life, Graduate Admissions, Undergraduate Admissions and Enrollment Marketing and Analytics.  She leads the University Diversity and Inclusion initiative and serves as an officer of the University.

Throughout her career, Dr. Morriss-Olson has gained a reputation as a creative academic entrepreneur.  She led the re-engineering of the learning community including the development of the Thumbprint—Bay Path’s distinguishing educational aspirations—as well as the signature Women Empowered as Learners and Leaders (WELL) program. Under her leadership, the institution established a new academic structure, diversified and strengthened faculty resources and development, and launched an online learning initiative.  During her tenure at Bay Path, Dr. Morriss-Olson has led the development and launch of twenty-five new graduate degree programs, increasing the graduate program net tuition net revenue contribution by more than $27 million.  Additionally, she led planning efforts culminating in the awarding of significant external grant funding including a $2 million Title III grant, and three separate NSF grants totaling nearly $2 million.

Prior to joining Bay Path University, Dr. Morriss-Olson held executive level enrollment management and advancement positions at North Park University in Chicago where she restructured the enrollment management function, resulting in a substantial increase in total enrollment, led the institution’s first capital campaign which exceeded goal at $40 million, and founded and directed the nationally recognized Axelson Center for Nonprofit Management, one of the first academic centers of its kind in the country.  In addition, she held the first Axelson endowed professorship in nonprofit management, teaching courses at both the undergraduate and graduate levels in a wide range of areas.

Dr. Morriss-Olson is a nationally recognized higher education thought leader, speaking and writing often on topics such as higher education innovation, disruption and leadership. She is the author of the book Survival Strategies for Christian Colleges and Universities: A Leader’s Guide to Managing in Turbulent Times (1997) and she writes a monthly column for the online newsletter Higher Ed Impact.  She has served as a peer evaluator for the New England Association of Colleges and Schools (NEASC).  Her blog can be found here: The Accidental Provost or you can follow her on Twitter @BayPathProvost

Dr. Morriss-Olson received a Ph.D. in Educational Leadership and Policy Studies from Loyola University of Chicago, a Master of Arts in Counselor Education from Northeastern Illinois University, and a Bachelor of Science in Sociology and Social Work from Minnesota State University at Bemidji.  In addition, Dr. Morriss-Olson has completed several executive leadership development programs including the Institute for Educational Management (IEM) at Harvard and the Executive Leadership Academy sponsored by the American Association of State Colleges and Universities and the Council of Independent Colleges.

The Value of a Bay Path Education

When you graduate from Bay Path, you will have the knowledge and skills you need for whatever the future may bring.